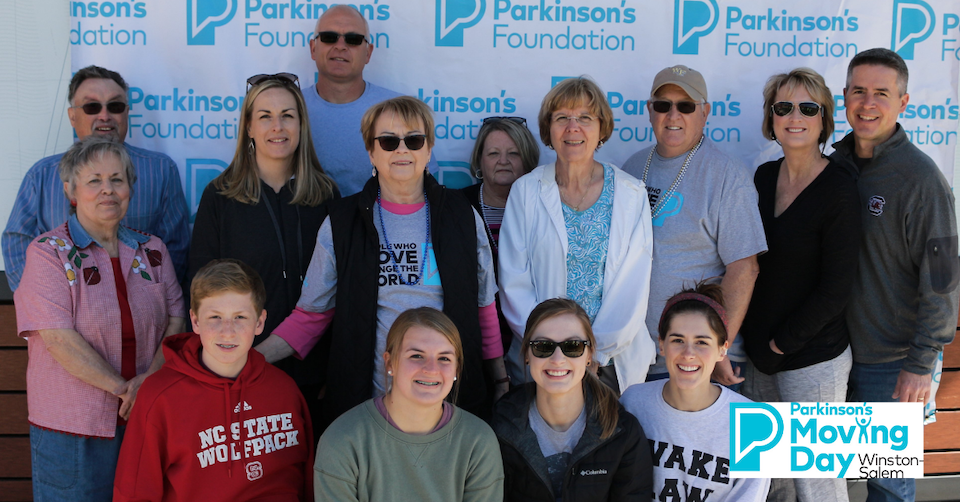 Keep moving and join the fight against Parkinson’s Disease by participating in the Parkinson’s Foundation virtual Moving Day/Winston-Salem set for April 24!

Approximately 60,000 Americans are diagnosed with Parkinson’s Disease each year and more than 10 million individuals around the world are currently living with Parkinson’s. It’s a disease that affects our friends and families, our neighbors, the strangers we pass along the street and more than we will never know.

Due to Covid-19, this year’s Moving Day will be held virtually on April 24th in order to keep participants and their loved ones safe. But that does not make the impact of this day any less important.

Diana Parrish is the Development Director of the Parkinson’s Foundation Carolinas Chapter, and she is also a caregiver as her husband is living with Parkinson’s Disease. She says her position with the foundation is a calling and works to improve the lives of those diagnosed with PD and educate people on resources available to them.

When talking to other caregivers and communities surrounding those with PD she says, “I can relate to what they are going through, the medications, what their families are going through. I’m part of the Parkinson’s family. It’s not just lip-service to something I was trained on—I know it.”

One person she knows and can relate to is Judy Paige, a member of our community who was diagnosed with Parkinson’s Disease in 2012.

“Our family has been so inspired by our mom and how she has tackled it [Parkinson’s Disease] with grace and never complained,” said Judy’s daughter, Cammie Webb.

Judy’s family has participated in Moving Day previously and speaks to how it is an inspiring event. “We were blown away by the camaraderie and the resources,” Cammie said. “Moving Day brought awareness to us about what the Parkinson’s Foundation does and connected us with people who are facing the same kind of challenges.”

“It’s a great resource for a disease that affects so many people, and it reminds everyone that to do well with Parkinson’s you’ve got to keep moving—no matter what,” Cammie said.

It’s because of The Carolina Chapter of the Parkinson’s Foundation that Judy Paige joined Rock Steady Boxing and chose boxing as her way to keep moving.

Diana echoed how important it is to keep moving and explained that during the 2021 virtual Moving Day there will be opportunities for participants to sing, dance, box, practice yoga and even learn about horse therapy, all from the safety of their living room.

There will be doctors and physical/speech therapists speaking during these virtual events talking about different resources available and who you can call to learn more.

But the movement doesn’t stop there. The Carolinas Chapter of the Parkinson’s Foundation is already planning educational seminars and symposiums for the second half of 2021 and into 2022. Symposiums already planned for this time frame include events specifically targeted for Veteran’s, African Americans and Hispanic Americans with Parkinson’s Disease and a symposium focused on mental health and isolation. For a complete list of events go to https://www.parkinson.org/Carolinas.

It’s the funding from Moving Day that allows the Carolinas Chapter of the Parkinson’s Foundation to host educational events and provide resources to those within our community…all at no cost!

For years Judy played the piano at her church but Cammie says her mom was never a public speaker. Nevertheless, “she prepared and presented a PowerPoint to her church” to raise money for the fight against Parkinson’s Disease. “So many local friends have been supportive both in person and financially to her efforts.” She even chose to do a fundraiser on her birthday for Moving Day, Cammie said.

The Carolinas Chapter of the Parkinson’s Foundation has set a very obtainable goal of $45,000 for this year’s Moving Day and they need your help. You can sign up to support someone you know with PD, create team t-shirts, find tool kits that will help you to fundraise and so much more on their website at www.movingdaywinstonsalem.org.

Keep moving Davie County and join the fight against Parkinson’s Disease by participating in the Parkinson’s Foundation virtual Moving Day/Winston-Salem set for April 24!!

This post originally appeared as an article in the March 2021 issue of DavieLiFE as Keep Moving and Join the Fight Against Parkinson’s Disease.

Making plans for the holiday season? Don't forget to include all of these fun, family-friendly events happening in our community!Learn more >>> fb.me/e/3ENpZvEtC ... See MoreSee Less

Don't worry, we promise not to spam you - we only send out updates when new content is available.